Today, March 2nd, I received some questions related to the new format on Google Play of showing results by searches of specific keywords. Here is an example. 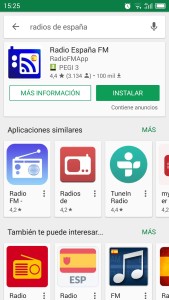 If we look for “Radios de España” a featured App appears, subsequently, those which are recommended “Similar Apps”, then another recommendation “You may also be interested” and before the usual list of results, a last recommendation, “More about the developer of the featured App. ” As I said, lastly, we have a summary of the list of about 250 Apps that Google Play returns for the keyword search “More results” . 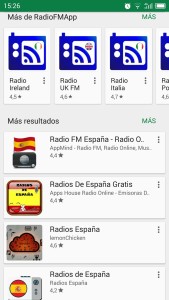 In all of them we can click on “More” and we will go to the conventional or common list. As shown in the following example for “More Results”. 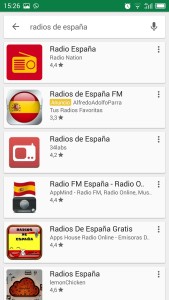 Will it be this way for all searches from now on? The answer is no. In fact, if we search for other keywords, we have different ways of displaying the results.
For example, for “Therapy Music”: 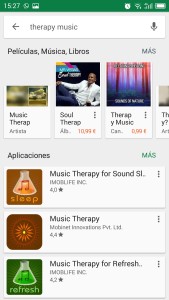 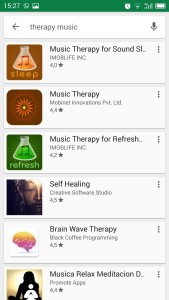 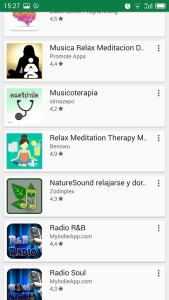 Or, “Radios de México”, it is shown as it has always been: 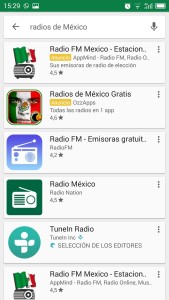 Google is testing, and a few weeks ago, between November and December 2016, they did something similar. If you searched for certain keywords, not all, but in some cases, they showed between three and five highlighted Apps, as it appears in the first image of the article, but instead of one, at least three and up to five. Then it showed “More results”, so by clicking on “More”, the list was displayed as always without including the highlighted Apps. After a few days of testing, it returned to showing how until a few days ago, that is, for each search, a list of about 250 Apps results are displayed with the Apps that are using Adwords campaigns in the first or the first two positions.

Something very curious is what has happened since yesterday, if you look at the listing for “Radios de España”, “More results”, we see a promoted App in the second position, which does not make much sense for Google’s own interests in generating an income. That is to say, in order for someone to download that App by that keyword search, you see the featured App, slide the screen, see many similar Apps, those that are recommended, go to another window by clicking ‘more’ and in the second position, as I mentioned, you will find it. It doesn’t seem to make much sense. Therefore, everything indicates that they are simply testing as they did between two and three months ago to study different possibilities when showing the search results on Google Play. As always, we will gradually see what happens.

Another consequence of this change is the new alteration in the search results (I recommend reading the articles prior to this one). Avoiding to take long, I only took one of the Apps that I am monitoring in test mode, it is not an App with any objective other than to test Google Play itself. We can see the positions occupied for different searches throughout February.

If you look, today, the results have changed a great deal. Words for which it was positioning badly, now make it better, and to the contrary. This is just an example, but it complies with 80% of the Apps that I follow continuously: There is now a significant difference compared to the previous weeks for the same target keywords.