A few weeks or even a month ago, we knew that Google has been making improvements in its positioning algorithm to optimize how Google search results for certain keywords are displayed on Google Play. Its intention has been to tone down the influence of reviews and the keywords included within them in the positioning of an app, as well as to lessen the good positioning that recently published apps obtained when they achieved a very high growth from the first moment of publication.

The algorithm works, or worked, as follows: You could position a new app by certain keywords if they appear frequently in comments made by users even though they do not appear in the description and / or the title and also if this app has enough downloads from any media from the first moment of its publication, including high retention and that is positive (more downloads than uninstalls). In this way, it has managed to surpass more long-running apps on the market.

Google tries to show results in the most natural way possible on Google Play. They want to avoid, for example, if in a fitness app there are comments like “I love the app, but I end up dead when I use it”, if these kinds of comments repeatedly appear, that words like “dead” end up being a keyword by which this app positions well or even in the first place when being searched for. This is an invented example despite the fact that there are multiple, well known cases which, with the intention of harming certain brands, used this type of technique to position them by meaningless and detrimental keywords. It is a determining ASO factor.

Google made a change in the Google Play App market on Friday 13th January, removing the results of the rankings in a way never seen before, or rather never so drastically in recent times. 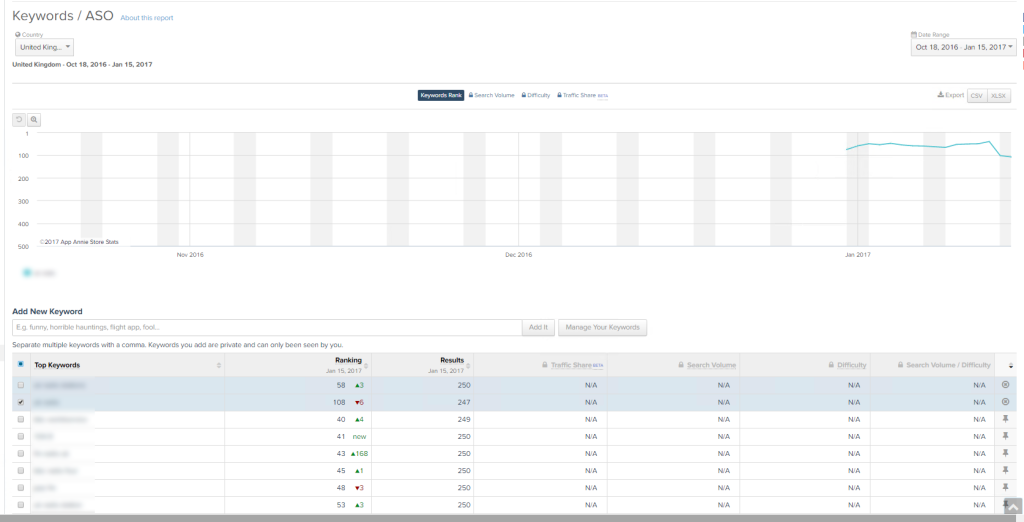 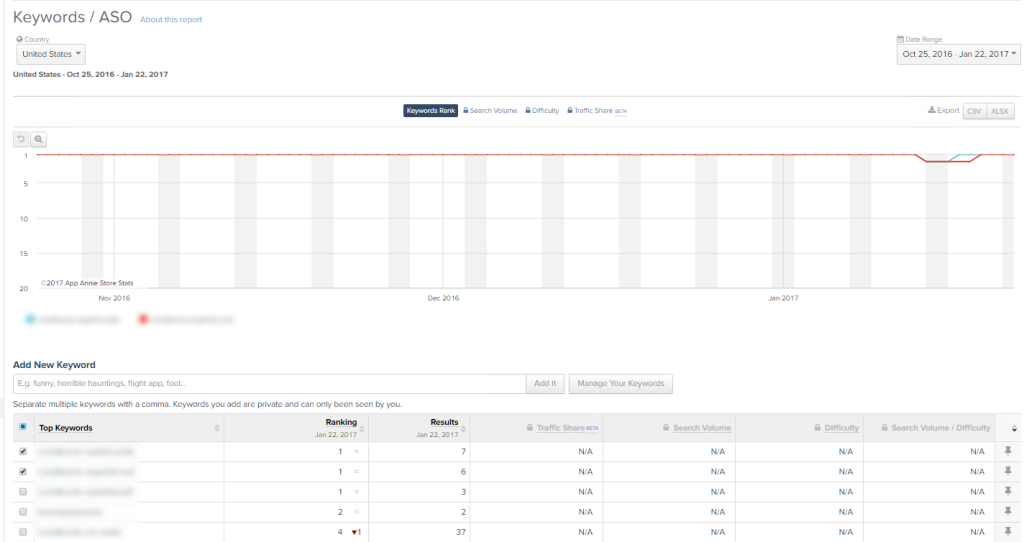 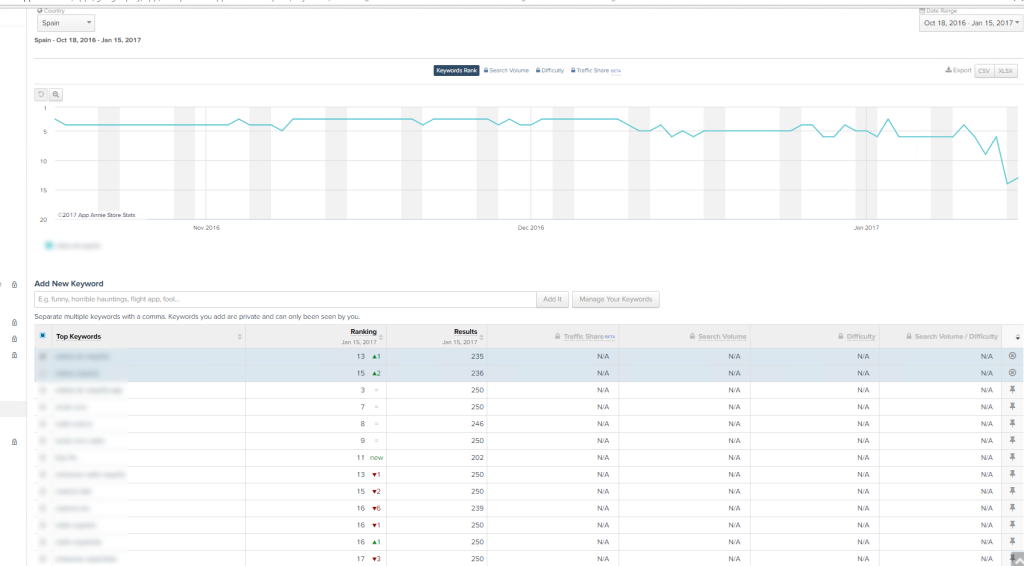 – This data has been provided by AppAnnie –

But what happened on the 14th and following days? Making a detailed study in different niches, the Apps that occupied the first positions by specific searches:

These patterns were fulfilled in each of the searches performed. Aside from other less significant ones.

In the following image you can see annotations made on January 14th in an Excel. I use this Excel to track some Apps in a specific niche, the best known, directly from the browser. In this case, I was trying to find patterns from the update. 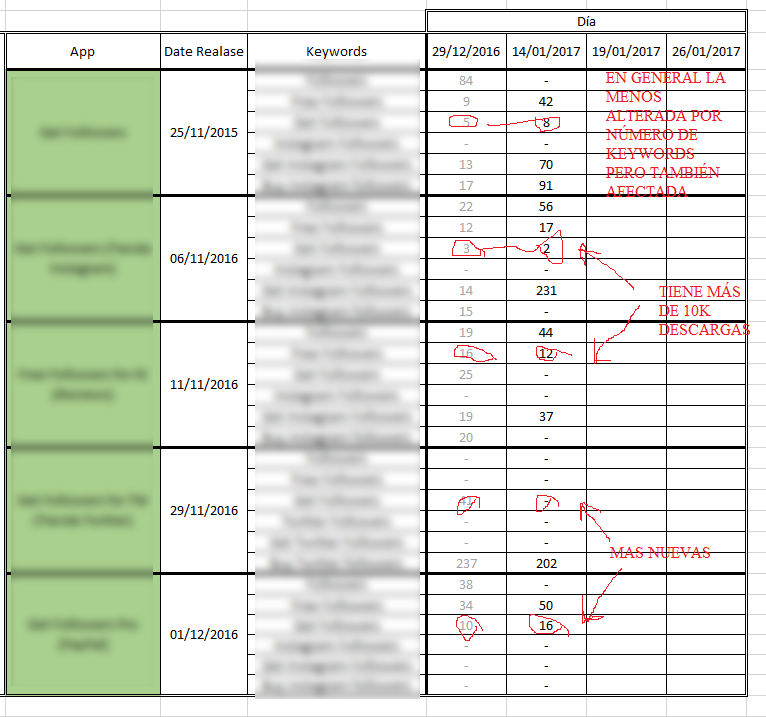 – This data is provided by AppAnnie – 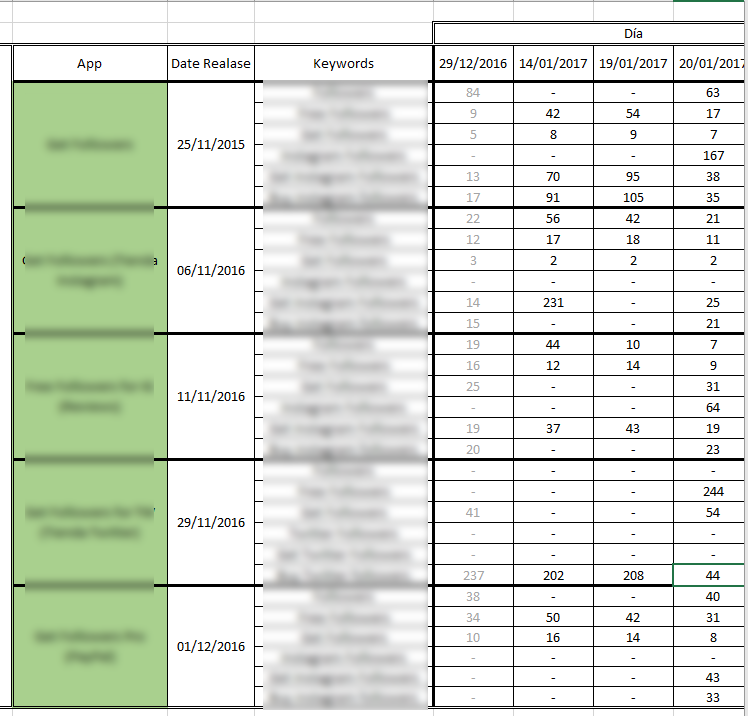 Today another week has just passed, we are on January 27th 2017 and we can assure you that, indeed, some of the changes have been consolidated, but in a much smoother way. By looking closely at the results shown today, we can be sure that the App title, as far as exact search words are concerned, has more relevance than it had previously. For example, if my App is called “Carlos Hernando”, and Google search is “Carlos Hernando”, my chances of positioning first in the results will be greater than an app called “Carlos Hernando App.” Well, this is logical, but with the combination of ASO factors, right now, it’s simpler than it was before. Through about 20 searches, it can be proved that there has been a jump in the rankings due to this update, as predicted two weeks ago. One such case is one of my Apps. 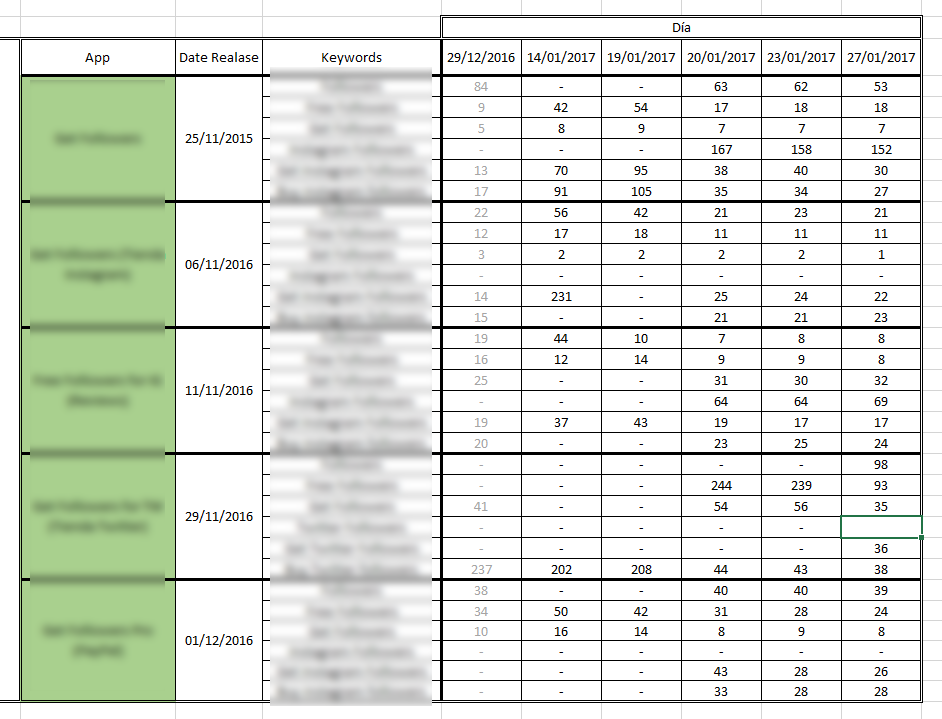 Finally, to clarify that the results shown are for Apps in which ASO and App Marketing are not working actively, they are only used to show the impact of this update. For the Apps I tracked myself in the Excel, it works promptly and passively with marketing campaigns and ASO optimization.

Does Google intend to implement those changes that it tried little by little? Could some of these changes have been errors? Will they rectify them? In the end, we will probably never know what happened and what will happen exactly, although thanks to analytics we can adapt to the ASO factors and the influence that these are going to be having following the updates within the Apps search engine on Google Play.

I would also like to mention that sometools or results-tracking platformsseem to have suffered a bug during the week in which Google made the changes commented on in the algorithm. Is it coincidence? Or is it all related?