The debut took place in the Sales Innovation School, a recently-opened business school in Madrid, an ideal place where we can attend monthly talks, round tables and debates organized by the group. The event began with a speech where Carlos Hernando told us about his career, from his first jobs in companies within the technology sector to the creation of several projects of his own. Part of his talk made refence to ASOApp, his current company, which focuses on the complete solution for mobile applications and where he is fully immersed at the moment. Subsequently, the topic to be discussed was ‘Mundo Móvil: Análisis 2017 – Tendencias 2018’, to enter into the subject matter which opened this first Spain Mobile World: What should an App have to be successful and report benefits?, a field where Carlos is one of the greatest experts worldwide. At this point we could see first-hand how this young entrepreneur works all the web of mobile applications through an example with one of his own, which has managed to position among the top rankings in the Google Play applications market within a determined category. This fact was one among many others that did not leave us indifferent to any of those who attended the event. 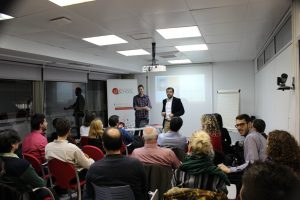 The subsequent round of questions did not go unnoticed either, since there were many people present who, curious about the authority of this apps expert, raised their hands to resolve any doubts and put into practice the resources and teachings on display during the talk.

Finally, many of the participants that attended this first Spain Mobile World did not hesitate to share their own experiences between the feelings of curiosity, enthusiasm and expectation.

It was an event that did not leave us indifferent and that increased the “desire for more” of the majority present before a world such as mobile applications, which is only just beginning to show its head.