Skip to content
Which App Builder to choose? What kind of apps can I create with one of them?.

Some of the questions you always ask us. Why? because it’s so easy to find App Builders, in fact, there’s so much competition out there that we’re not sure which one to choose to start building our applications.

In addition to the fact that the general lack of understanding of these tools makes us doubt what the possibilities we really have with them are.

Before answering the above questions, it would be good to define:

Rather than a technical definition, it is better to explain what it is from a practical point of view. Well, most of us know what a CMS is. In Spanish, a web content manager, right? Well, an App Builder is very, very similar, the difference being that instead of creating or managing a web page, we will do it on a mobile application.

But are these Apps native?:

No!. Broadly speaking there are three types of applications: WebApp, Native and Hybrid. Not to mention the most popular ones of recent times, PWA, or Progressive Web Apps. Through the App Builders, we will create hybrid Apps, because in the background we will have web code, html, but, nevertheless, this kind of content manager is equipped to be able to compile these Apps in native, for whatever the operating system is, though depending on the App Builder, some do not include all the options. Therefore, we will be able to publish these applications in the main application markets, such as Google Play and App Store. And with them, too, we can create PWAs.

Therefore, we will have a platform that, starting from templates or modules, as in the case when we create a web page with any CMS, WordPress, Prestashop, Magento, among others, will allow us to change the design aspect and certain options to successfully create a mobile application.

From ASOApp, we want to mention King of App, an AppBuilder which is completely different from what else is on the market. As we said there are many, hundreds, of AppBuilders, which are very similar to each other. Therefore, to give a good service and why not say it, to stand out as a business over other competitors, you must add value to the platform to create applications without the need to know how to program.

What has KOA done and is doing?

As we said, many of us know what CMS are, and within them, many of us use WordPress. It is estimated, in fact, that 30% of all websites are made from this CMS. However, very few of us know the AppBuilders, and that makes it hard for us to see what’s behind an App, how I can have my own App in app stores.

To facilitate this task, the professionals who have created KOA have merged both concepts, WordPress and AppBuilder, to have a CMS to create mobile applications in a similar way to the way we create our websites with WordPress.

KOA calls itself the “WordPress of the Apps”, but it is not, as you might think, a commercial action to break down this barrier that exists today with the mobile world. But they have really managed to have a platform that allows us to create our Apps using the same plugins, for example, that we already use in our WordPress websites.

On Thursday of this week, March 15, we will have the guys from King of App talking to the group Spain Mobile World, managed by ASOApp, at the SI School in Madrid, about:

“How to make selling Apps an attractive product for marketing agencies.” 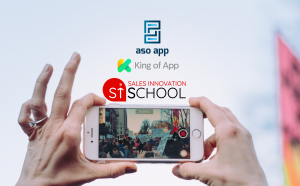 We can use KOA, to create our own Apps, but this can go further, and we can create third-party applications as we do today by offering these services for websites. Don’t miss it!

Finally, what App can I create with an App Builder, like KOA?

The answer is simple, what would you say if you were asked – “what website could you create with a CMS like WP-?” You will surely answer, “because it depends 100% on the abilities of each one, as well as on his or her knowledge”. Well, it’s exactly the same for the Apps. The more practice we have, the more knowledge we have, as well as the more we explore how to include different options, the more we will be able to theoretically develop complicated apps.